Bocas Del Toro is one of the most popular Eco-Tourist destinations in Panama. The archipelago consist of 9 main islands,  52 cays,  thousands of islets and is considered to be one  of the most biologically diverse places … Continue reading →

Sea of Cortez, the worlds aquarium

Mexico is one of the top 5 countries in the world in terms of ecological diversity and is home to the Paricutin Volcano that is also one of the 7 natural wonders of the world. This is the result of Mexico’s topography which varies significantly and its geographic situation which places it between distinct eco-zones. There are many ways to enjoy these natural wonders found in Mexico including white water rafting, scuba diving, sailing, trekking, mountain climbing, bird watching, biking and a variety of other eco-activities. Naturally, there is some disagreement about which of mexico’s natural wonders are the best, so researchers have conducted surveys to determine which of these is most popular. Copper canyon was determined to be the most popular followed by Sumidero Canyon, the butterfly reserves and the meso american barrier reef..

El Requeson beach is found in the bay of concepcion and is part of the sea of cortez. Great location for camping, kayaking and snorkeling.

Grutas del Mamut, one of the great natural treasures of mexico is the extensive network of caves to explore

Sumidero Canon is one of the most popular natural wonders in mexico and was carved out by the Grijala River seen here. In some places the ealls are as high as 1000 ft and its 13 kilometers long. There are thirteen rapids, 5 waterfalls, 3 beaches and 2 freshwater springs.

Blue Agave plants in the State of Jalisco. A cultivated eco-system and UNESCO World Heritage Site.

El Rosario Butterfly Reserve, Michoacan where most all the monarch’s butterflies of north american migrate annually. It is also a unesco world heritage site

There are over 7000 cenotes in the Yucatan peninsula. Tourist and locals alike enjoy swimming, snorkeling, and scuba diving in the pools of water created by underground rivers

Isla Cozumel one of the best scuba diving locations in the world found in the midst of the meso american reef system.If your not into scuba diving than try this glass bottom boat

Akumel, Maya Riviera, the meso american reef system is a short swim for this lagoon.

One of two volcanos found in Colima of Jalisco. This one seen in the distant background is called El Fuego and is the most active volcano in Mexico

Cooper Canyon has 6 distinct canyons in the Sierra Madres. It is larger and deeper than the grand canyon of Arizona.

Sian Ka’an, entrance to the primary mangrove chanel leading into one of the worlds unesco natural heritage sites. 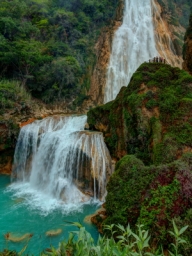 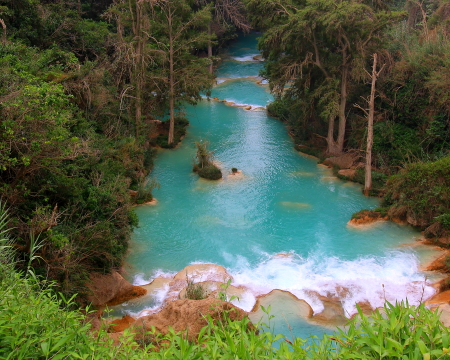 a look downstream the from 250 drop from the Velo de Novia falls.

Mexico has about 6,000 miles of coastline and over 450 beaches with a variety of physical characteristics. These range from desert to tropical environments but while it may be  easy to classify beaches according to these objective characteristics, the choice of which beach resort  is best for a vacation  is much more subjective. A quick internet search will  turn up several sites that rate beaches in Mexico by  a variety of different criteria but there is only one objective system that rates beaches by strict criteria applied the world over and that site can be found at http://www.blueflag.org. Their system for evaluating beaches started in France around 1985 and is now run by the European Foundation for Environmental Education. In general, the Blue Flag criteria used to determine which beaches deserve to be awarded are water quality, safety, services, environmental management and information. As of now, there are 5 beaches that have earned the blue flag award in Mexico. Coincidently, all five of these beaches are also on the list of the best beaches in Mexico as published by websites such as Travelers Choice and magazines such as U.S News and Travel that use tourist opinions or travel writers opinions to rate beaches. So, if finding the best beach is a top priority on your next vacation, it comes down to a decision about the intangibles such as idyllic versus the tangibles such as environmental information signs. In the photo essay below there is a photo of Playa Delfines, a blue flag awarded beach, as well as several photos of beaches in Tulum which Travelers Choice rates as the best in Mexico. All other beach photos below are highly rated by one or more survey about best beaches in Mexico.

Akumal, one of traveler’s choices top 10 beach pics in mexico

Playa Akumal, a top choice for snorkeling and protected area for turtle nesting . 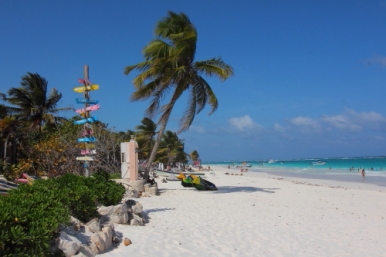 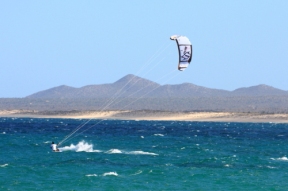 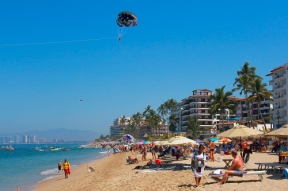 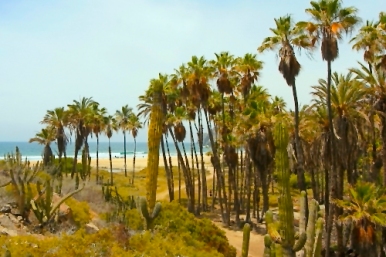 Ensenada Grande, Isla Partida, Sea of Cortez, One of the top 12 beaches in the world

Akumal, or place of the turtle in Mayan, is a small americanized beach community located between Playa del Carmen and Tulum. It is not only a nesting ground for sea turtles but home to Centro Ecological de Akumal which is dedicated to sea turtle protection, environmental marine research, education and sustainable tourism development. The bay of Akumal is sheltered from waves so conditions for turtles and snorkelers alike are arguably the best that can be found within the Maya riviera. ln addition to the loggerhead, green and  hawksbill turtles that call Akumal home; snorkelers can expect to see a variety of colorful tropical fish and coral thanks to the clear and calm waters of this bay. The  Yalku lagoon, found at the north end of the Akumal, is another ideal location for snorkeling. This happens to be  a unique environment where  fresh waters from the yucatan’s underground system merges  with the caribbean sea  to form a lagoon  sheltered from waves. For additional details and images, please go to the photo essay below.

located at the entrance to this seaside resort, town meetings and other local events take place here

group or individual snorkeling lessons are available at akumal beach

a meeting place with information for divers

art and craft work for sale, just off the beach

are both in the same building 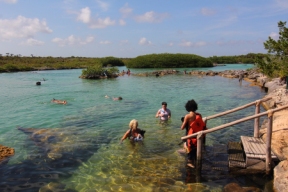 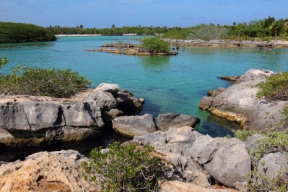 a sheltered lagoon with calm, clear water and lots of tropical fish 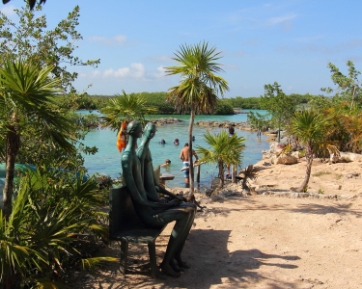 a sample of the restaurants interior decor 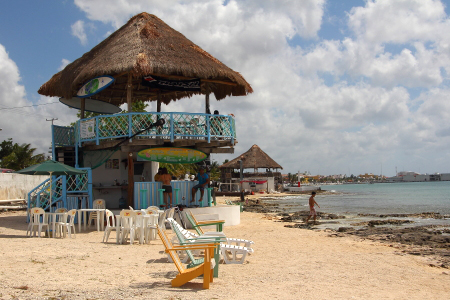 Cozumel is the largest of Mexico’s islands measuring 53 km by 14km and is found in the Caribbean Sea about 1 hour away from  Playa del Carmen on the passenger ferries which make frequent trips on a daily basis.  Although, there are a variety of things to do once you get to Cozumel the main attraction has always been snorkeling and scuba diving to experience the great meso american reef system. One travel guide book has a list of 86 attractions around Cozumel but 43 of them involve different scuba diving or snorkeling locations. Other things to do while on the island  are  related to either cultural activities,  parks or  beach clubs.

Three types of beaches can be found around this island and they will be either rocky,  smooth white sand or  hybrids. According to people in the know, rocky beaches are a indication of good snorkeling opportunities off shore and they are plentiful. The smooth white sand beaches are not as common as the rocky type but they can be found at the northern or  southern tips of the island’s  western shores such as Playa San Francisco near Punta Sur. Finally, there is the hybrid variety where sand has been brought in to build a beach on top of the limestone croppings that are the norm around Cozumel.. One such man made beach is found at the Chankannab National Park to the south of town.

At the end of the day, most people head for  San Miguel to enjoy happy hour, dinner or other cultural activites. This is the only city on the island and it has a population of over 75,000 people according to the last count. One of the main attractions here is the pedestrian only Plaza Centro where you can find restaurants, shops, street artist, cafe’s and nightlife. In the photo gallery below you will find images and more information about Plaza Centro, a few of the beaches  as well as some other highlights.

the beach and a few amenities at this beach club

Just across the road from Chankanaab National Park 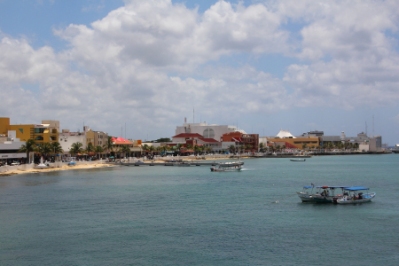 also found north of San Miguel only a few miles from the momument.on Avienda Rafael Melgar

this monument is a tribute to the maya civilization that once occupied this island. It is found on the beach road going north from town.

an alternate mode of transportation around town 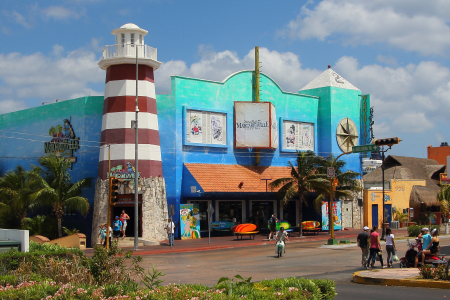 Puerto Morales is a small seaside fishing  village about halfway between Cancun and Playa del Carmen. It was not built for tourist and commercial development has been kept to a minimum, so it is still more like a residential community where prices for most everything  are lower and the pace much slower than the typical “touristy” resorts. The  Great Meso American reef lies just 500 meters off  the shores of Puerto Morales and offers a variety of marine life as well as one of the most beautiful reefs in the world. So it should not come as a surprise to say that the main attractions here are fishing, scuba diving and snorkeling. The largest annual fishing tournament is held in May and offers $80,000 pesos to the winner while scuba diving features coral reef formations, wrecks and schools of colorful fish. Other nearby attractions include the Dr. Alfredo Barrera botanical garden and Crococun Zoo, in addition, the photo gallery below  provides  a look at some of the sites around the center of town.

one of many boats available for fishing trips 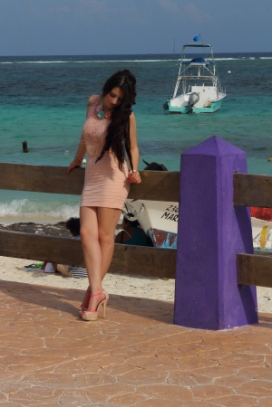 a local modeling posing on the boardwalk

A beachfront restaurant in the center of town

a good place to relax and enjoy the scenery, this boardwalk park is part of the town plaza (zocala) in the center of town between the main pier and pelican’s pier where people relax, enjoy the view and special events

new and used books for sale in both english and spanish languages. Located right next to the cafe

The RV lifestyle in Puerto Morales. Looks like an old school bus conversion in the a psychedelic style of the 60’s

unique architectual design across from the cultural center, It is used a local musuem

Bahia Pulmo is both a national marine preserve and UNESCO world heritage site found on the East Cape of Baja California Sur about 60 miles from the Los Cabos resort area of Mexico. Bahia Pulmo is unique in that it has the only hard coral reef in the sea of cortez and is one of only 3 living reefs in North America. The abundant coral growth on the rocky reefs provides plenty of shelter for a variety of colorful reef fishes, many of which are not found anywhere else. This in turn is what attracts many scuba divers and snorkelers from all over the world to the Cabo Pulmo area.

Architecture is the art and science of building design.