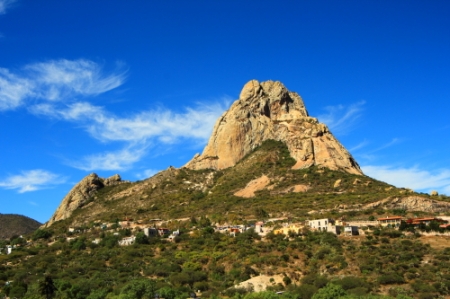 worlds 2nd tallest monolith in the shrubland environment of Queretaro

At 350 meters, Pena de Bernal is the third tallest monolith in the world. It is located near Queretaro, Mexico in the small village of Bernal. Also known as one of Mexico’s “Pueblo Magico’s” or magic towns because of its historic charms, closeness to a major city and peaceful atmosphere.

A chapel monument located on the hill in Queretaro where the Mexican army defeated Maximillian to win freedom from Austria.

This chapel sits on a hill which was the scene of a defining moment for the republic of Mexico. Here, on June 19, 1867; the verdict of the war tribunal was carried out when Maximillan of Hapsburg together with his generals Miguel Miramon and Tomas Mejia  were executed by a firing squad. This act sealed the triumph of the Republic and returned sovereignty to Mexico. In 1900 the government of Austria asked permission to build a chapel on the spot. Today this hill is a national park called Cerro de las Campanas and is located in the city of Queretaro. It also includes a large statute of former President Benito Juarez, a museum, the University of Queretaro, and a recreation area.

Architecture is the art and science of building design. Building construction is the process of assembling materials to form a building.