The La Pila Fountain landmark was constructed in1592 with a diamond shaped Moorish design made of brick.

Chiapa de Corzo was once the capital of the state and is now one of Mexico’s  Pueblo Magico’s  due to it’s historical significance. It is located between San Cristobal de Las Casas and Tuxtla Gutierrez on the banks of the Grijalua river. The main tourist attractions here include some impressive church architecture, sumidero canyon and ecological park, waterfront restaurants on the river and the waterfalls of Chorreadero Park. Touring  Sumidero Canyon requires an inexpensive 2 hour boat ride that cruises down the Grijalua river through steep vertical walls that rise up as high as 1000 meters in some places while the park offers hiking, cycling, rappelling, rock climbing and kayaking recreational activities. The  Chorreadero waterfalls and ecological park is only a 15 minute ride by taxi or car  from Chiapa or the waterfront. The main attraction here is  a stream that emerges from a cave which is the end of an underground river and plunges like a waterfall from a height of about 25 meters to form a series of cascading pools for swimmers to enjoy. The caves and underground river can also be explored by arranging a guided tour. Take the guided photo tour for more information about these attractions. 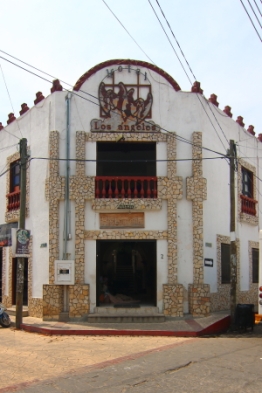 Here’s one of several hotels in the central historic district

a public market behind the church

One of several waterfront restaurants on the Grijalua river

a street muscian entertaining shoppers in the main plaza

a view of some rock outcroppings also carved by the river

While cruising along the river, you will see crocodiles and a variety of birds such as egrets and heron’s 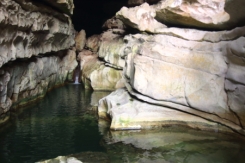