a headstone made of seashells

In 2003 the Day of the Dead was declared a masterpiece of oral and intangible heritage by U.N.E.S.C.O. and every year the Xcaret Park near Cancun, Mexico celebrates the Day of the Dead with a 5 day event known as the ” Festival de Tradiciones de Vida y Muerta”. During this celebration visitors can enjoy traditional cuisine of the region, workshops, handcrafts, visual art exhibtions, music, dances,  rituals, altars, and offerings. One of the highlights of this event is the tour of their cemetery which is both a tribute to the deeply rooted attitudes of mexicans towards death and a replica of cemeteries found throughout Mexico. This cemetery is located inside the maya village on a hill with winding spiral paths that lead to the top.The path is lined with unique and imaginative headstones, plaques and ornamental structures that display  a variety of spiritually oriented designs and attitudes about the dead.The photo gallery below is a sample of what to expect in the cemetery and in other locations around the park during this event.

the festival logo and display near the entrance

day of the dead altar and offerings 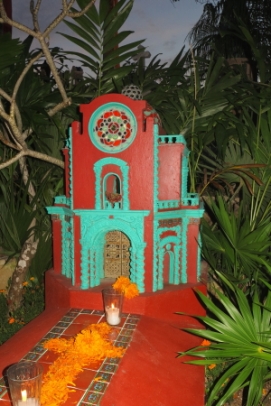 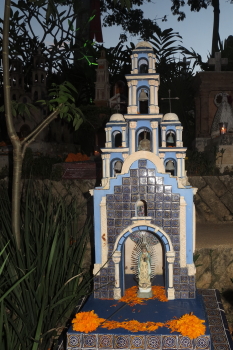 tiled headstone with a spiriual motif 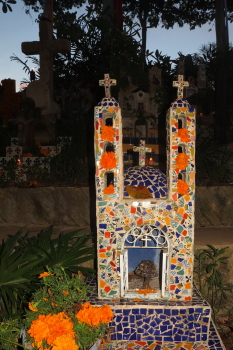 a tiled headstone with other religious design elements 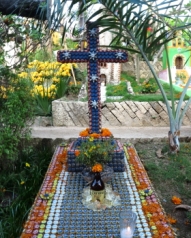