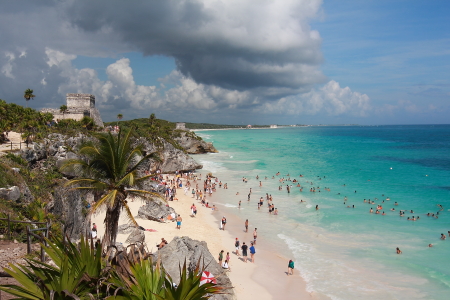 For years the sleepy resort town of Tulum existed in a time warp with unspoiled natural beauty to complement  its famous archaeological sites. However, many people fear that new development projects involving condos, hotels, shopping centers and airports are the beginning of the end for Tulum as we know it today. So, in a sense, the maya predictions may be accurate in that the old way of life in Tulum is rapidly coming to an end as a result of urban sprawl. Of course, there are ongoing efforts to preserve the small town appeal and eco-friendly environment but as of now the old Tulum is gradually fading away but not in the way some expected. 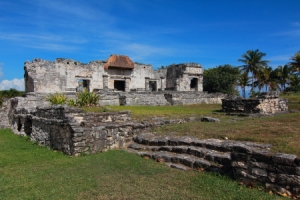 Getting back to the archaeological site, the ruins of Tulum are situated on a 12 meter high cliff overlooking the Carribbean sea and some of the worlds best beaches. In it’s heyday, from the 12th century to the 15th, the city was an important seaport  and home to many of the Mayan elite including both kings and clergy. Consequently, it was surrounded by a large wall which served to protect the city from invaders and separate the elite rulers who lived here from the commoners. All together the site consists of about 60 well preserved structures dating as far back as the year 250 A.D. The most imposing and likely most important of these is the El Castillo where religious ceremones were performed in the upper temple.