September 20th to the 23rd was the inauguration of Club Hipico and Grand Prix Equestrian Show Jumping in San Miguel de Allende, Mexico. It is located in the exclusive gated community of  Otomi Lake and Villas close to the historic center of this world heritage site. The club features a restaurant, galleries, 3 paddocks and 3 separate courses for various levels of competition. In the future they will be hosting both national and international equestrian events.

The outcome of  a Grand Prix show jumping contest  is based on numerical scores determined only by whether a horse attempts an obstacle, clears it, and finishes the course in an allotted time. Obstacles include verticals. spreads, double and triple combinations of each, along with many turns and changes of direction. The object is to jump cleanly over all obstacles on a set course in the time allowed. Faults are assessed 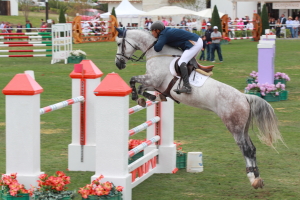 for exceeding the time allowed, knockdowns and refusals to jump the obstacles. In higher levels of competition, such as Grand Prix events, the courses present more technical and complex challenges for the horse and rider. Not only does the height and width of obstacles increase but the turns become tighter and distances between obstacles shorter making the course more  difficult to complete without faults.